Six months since Scotland moved to an opt out system

This Organ Donation Week marks six months since Scotland moved to an opt out system of organ and tissue donation.

New figures show over half of people (54%) in Scotland have now registered their donation decision – 51.5% to be a donor and 2.8% choosing to opt out.

The opt out system was introduced on 26 March to save and improve lives. If people aged 16 and over in Scotland haven’t opted out of donation, they will be considered a possible donor if they die in circumstances in which they could donate.

Under the opt out system everyone has a choice – to be a donor, or opt out of donation – but it’s important to make that decision known.

In Scotland, there are an average of around 500 people currently waiting on an organ transplant, however only around one per cent of people die in a way that makes organ donation possible.

“Over half of adults have now recorded their donation decision – the highest percentage in the UK.

“Donation remains a personal decision and everyone has a choice.  We are committed to continuing to raise awareness of the choices people have under the opt out system and the importance of making their donation decision known.

“I would encourage people to make a decision about donation, record their decision on the NHS Organ Donor Register and tell their family and friends, so they know what you would want to happen.

“We have made tremendous progress in increasing donation and transplantation in Scotland over the last decade, with the move to opt out part of a package of measures to reduce the number of people in Scotland waiting for a transplant at any one time.”

Gillian Wilson has highlighted the importance of sharing your donation decision with loved ones following the death of her beloved husband Gavin. Builder Gavin, 55, died unexpectedly in December 2020, and went on to become an organ donor, saving the lives of four people. 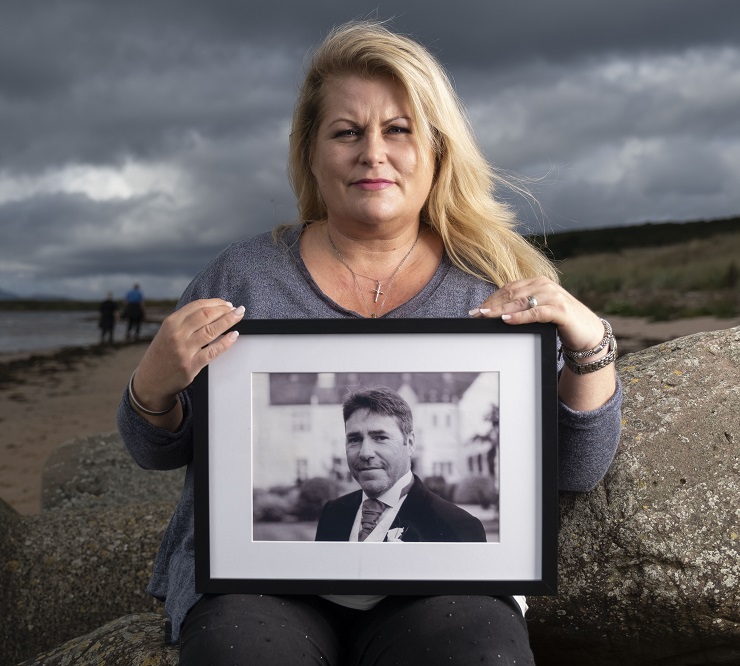 Gillian and Gavin, from West Kilbride, had made sure to speak openly about organ donation with their four children, and about their wishes to become organ donors.

“When Gavin went to work that Wednesday, he was fit and healthy, so when I got a call at 11:30am to say he was at the hospital, I rushed straight there with my daughter. Things weren’t looking good, and the doctors said there was nothing they could do but wait. He was placed into an induced coma and the next day he was actually breathing by himself, so we had hope.

“One day something changed – no one had said anything to us, but we all felt it. My daughter came home with me from the hospital that night and I brought up the topic of organ donation and just said, ‘If things don’t go our way, organ donation is something I think we should talk about’.

“The next day, the doctors came and told us that they didn’t think there was any brain activity. However, we needed to wait for specialists to see Gavin the following day and run some tests. So that night, my daughter and I asked if we could speak to the donor nurse. In our family, we had always spoken freely about organ donation so the kids knew what we’d have wanted.

“Gavin had donated blood all his life, and we’d actually had a conversation with all our kids when they were old enough to make their own decision.”

“We decided to approach the staff about organ donation as we’d seen how upset they all were for us, and we knew we had to move quickly. From that moment on, something in your brain just clicks and you can’t think about what you’ve just been told, instead my focus switched to donation and the importance of fulfilling my husband’s wishes to be an organ donor.

“Having had that conversation, I knew my husband’s wishes 150%, I was sure this is what he would’ve wanted. By having that conversation, you can make it easier on the people you leave behind. As we’d spoken about donation openly in the past, it also meant that no one in the family had any objections.

“Time just stops when you’re in that situation. It was only days we were there, but it felt like weeks. You’re not thinking right, so I can’t even imagine making that decision without knowing what he wanted.

“Gavin always used to tell the kids when they were doing something tough to keep going and just finish on a positive, that was Gavin through and through. I knew he was amazing; he was my husband! But all the tributes people left, we had no idea how many people he’d helped.

“You think you know someone, but he’d gone about his life quietly helping everyone, never saying a word to us about it.  Gavin made his life count by being caring and giving to others. So for us, there was no other option.”

Have questions or concerns?

Get the facts about the organ donation process, funeral arrangements, faith and beliefs, the opt out system, family involvement and more.

Get the facts now